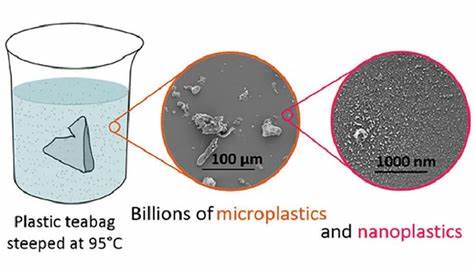 “The levels of nylon and polyethylene terephthalate (PET) particles released from the teabag are several orders of magnitude higher than plastic loads previously reported in other foods,” according to the McGill University study. Researchers tested leachate from teabags used by four popular supermarket teas. The peer-reviewed study, published in the journal Environmental Science & Technology, concluded that “at brewing temperature (95°C) a single tea bag releases approximately 11.6 billion microplastics and 3.1 billion nano-particles into a single cup of the beverage.”

The Tea Association of the USA, Inc. quickly released a formal response assuring consumers “that tea brewed in tea bags is safe to consume.”

During the month that followed, tea brands fielded a lot of questions from concerned customers. The results were questioned by fellow scientists who posited that airborne contaminates might have raised the count (citing the non-reassuring fact that in the US up to 33% of household dust is microplastic). Critics also said that slicing open the tea bags to release the tea before testing might have influenced the count (but McGill’s researchers pointed out that a control sample demonstrated no difference in the amount of leachate compared to uncut bags).

After much media attention, including a segment on the TV program Dr. Oz, no one credibly advanced the idea that exceedingly long threads of plastic polymers that break into tiny, tiny particles when heated to a boil lead to harm. But no one really knows if these very, very small micro- and nano-particles when ingested in small amounts are harmless.

Ultimately the manufacturers of the films, paper, and plastic mesh used to make tea bags cleaved into two camps: one stating that while it may not be the most environmentally sustainable choice, nylon is safe and readily available at a cost well under a nickel per pyramid bag.

The great majority of suppliers are deeply invested in compostable bioplastics. These plastics are at least two or three times more expensive than nylon and PET but they are viable alternatives to traditional plastics and currently favored by brands selling premium tea.

Tea bags made of nylon and PET when viewed under an electron microscope revealed high levels of microplastic, and even smaller nano-plastic particles.

Paper and biodegradable plastics decompose by the action of living organisms, usually microbes. These microorganisms give off carbon dioxide, water, and biomass under industrial composting conditions that require temperatures of at least 140o F (60oC). To meet European Union (EU) standards tea bags made with bioplastics must break down in less than 12 weeks.

In contrast, long-polymer plastics including polyethylene, polypropylene, polystyrene, poly(vinyl chloride), and poly(ethylene terephthalate) degrade into smaller and smaller fragments (ultimately nano sized) that are not biodegradable. Some plastics made from petroleum, such as PBS (polybutylene succinate) biodegrades and some plastics that originate from renewable biomass such as polyethylene and Nylon 11 are non-biodegradable.

There is no lower limit to the size of nanoplastic particles but these are generally measured in micrometers. There are no known ill-effects from ingesting what amounts to 60 micrograms – 60 millionths of a gram of plastic released by teabags but it is understandable that consumers would seek assurance from the brands they favor. PET and nylon used in making mesh teabags are certified as food-grade, a standard that limits degeneration to 10 milligrams per square meter of surface area in contact with foods.

It is not known how much nanoplastic is in the environment. The World Health Organization (WHO), in a technical report issued in 2019 concluded “there is insufficient information to draw firm conclusions on the toxicity related to the physical hazard of plastic particles, particularly for the nano size particles, no reliable information suggests it is a concern.” WHO based its conclusions on drinking-water samples where “fragments and fibers were the predominant particle shapes and polyethylene terephthalate and polypropylene were the polymers most detected.” Particle counts ranged from around 0 to 1,000 particles/liter with a high of 10,000 particles/liter. “Studies on absorption indicate that microplastics >150 µm are likely to be excreted directly through feces,” writes WHO.

In November the University of Victoria in Canada announced a study that found individuals ingest 39,000 to 52,000 microplastic particles from food a year.

“The totals could be higher,” according to research biologist Kieran Cox, a marine biology PhD candidate who authored the paper published in the journal ACS Environmental Science and Technologhy. Someone who drinks mostly bottled water could injest an additional 90,000 pieces yearly. Breathing induces another 35,000 to 69,000 particles per year, he said.

By looking at the amounts of these foods people ate the team estimates a person’s average microplastic consumption is between 70,000 and 121,000 particles per year

Cox told the Globe & Mail, “the likelihood that it’s an underestimate of your total consumption over the year is pretty high.”

“The last thing I want to do is cause some sort of undue alarm,” he said. “But even if we’re considering what I would call a pretty limited literature [26 studies], we’re getting into hundreds of thousands (of particles) a year. That’s a non-trivial dose.”

Dr. Jerry Burch, product compliance manager at Glatfelter Composite Fibers Business Unit, wrote, “The presence and ingestion of microplastics in the human body and any potential health implications are a relatively new subject.” He said the European Food Safety Authority has stated that microplastics are “unlikely to pose a health risk to humans.” The German BfR (Federal Institute for Risk Assessment) found that microplastic particles less than 1mm are completely excreted with “no damaging effects shown on the intestinal tissue or other organs,” based on a 2013 study of animals “fed various microplastic particles over 28 days at levels well above realistic human exposure scenarios.” “Recent studies have identified that microplastics can enter the body.

Key health organizations have acknowledged that human ingestion of microplastics is an area where much more research is needed to provide a full risk assessment,” writes Burch. As a responsible supplier, Glatfelter will continue to research and evaluate the issue, he said, adding, “There is no indication of any health concerns related to the use of Glatfelter’s teabag paper.”

“Woven tea bags made of synthetic polyester and nylon materials used in making the mesh pyramids “represent approximately 5% of the total tea bag materials market,” according to Helsinki-based Ahlstrom-Munksjö, a leading manufacturer of teabag materials. The company does not use PET or nylon, relying instead on a bio-plastic made from PLA (polylactic acid) derived from corn starch or sugarcane.

The company also produces a fully compostable and biodegradable tea and coffee filter with PLA as the heat-seal fiber. Stuart Nixon, vice president, beverage & casing business at Ahlstrom-Munksjö wrote, “Although traditional heat-sealable, ‘string & tag’ and BioWeb materials were not part of this micro-plastic study, Ahlstrom-Munksjö said it will investigate if there is any release of microplastic particles from traditional heat-sealable, string and tag type and BioWeb filter materials that it produces.”

Terranova, a large filter manufacturer in Barcelona, said concerns about non-compostable plastics led the firm to develop cellulose and abaca filters. Heat seal versions contain PLA from vegetal origin. “We do not use any PET or Nylon in any of our filter paper products,” wrote Pere Paris, regulatory affairs and food contact manager.

“PHA [polyhydroxyalkanoate] is definitely a potential candidate for a biodegradable tea bag,” writes Joe B. Grubbs III, Ph.D., senior polymer scientist at Danimer Scientific. PHAs are made by bacterial fermentation in the natural world (as opposed to synthetic polyester).

The PHA produced depends on what the bacteria are fed. Scientists have already identified more than 150 different polymer structures. Unlike PLA, PHAs are biodegrade at ambient temperatures, and sink in water which facilitates its anaerobic biodegradation in sediments. Danimer is working with Nestlé to develop PHA water bottles that dissolve in seawater.

“We have grades that would meet the requirements for tea bags and also would withstand boiling water. However, this is not an application we have targeted with our current grades of PHA,” said Grubbs. “I can’t make a claim about leachates as we have not done any specific testing with tea bags and leachates. However, we do know that PHA is more hydrolytically stable than PLA.

“PHA will break down in a lot of different environments per all of our certifications but we have not specifically tested it in the [human] body. It is a test that we would be open to doing but have not reach a point where we have or needed to test yet,” he said.

“As a premium tea supplier, it is obvious that the consumer behavior needs to change,” she wrote.